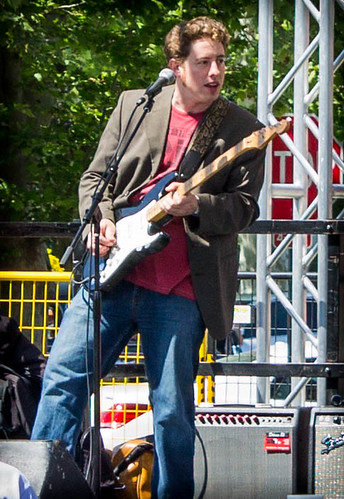 The best blues guitarist in the country is back! Sorry to all you other guitarist folk out there, but it's true. He'll tell us he ain't the best because that's his modest way, but go ahead and go toe to toe with the guy if you want. My money's on the dude from Fresno. The best way I can describe his style is that he plays Stevie Ray Vaughan tunes with the fluidity of Jimi Page. No joke. In fact, I think he actually conjures up a little Jimi Page juju whenever he pleases. The thing is, he just makes it look so damn easy to play. Just find him on YouTube and you'll see.

He's upped his suit and jacket game too. I would assume there comes a time in every good bluesman's life when it's 90+ degrees out and you're layin' down some sweltering hot licks in a dad-gum suit when you have already realized that you might be pretty good at this gig.

I've seen him play about a dozen times, and the most memorable besides playing on our wedding day was when he played in a little joint in my hometown called The Hot Pepper. It was a small restaurant with only about room for the 20 people in there, but my wife to be and I had a table for two right close to the band. And if that wasn't the best damn blues display I ever seen! They played a rendition of Hendrix's Voodoo Chile that was spot on to the T!   Even down to the distortion that perfectly mirrored the album version. I mean nailed it perfect! Hot I tell ya!

So now, After a couple years World and US tour playing for John Nemeth alongside Kid Andersen and gang, AC's back home and just cut a new album at Kid's studio. It ain't out yet, but it's coming and I'll post an update when it hits. It's called Reconsider Me.

Here's a video of him jammin' and another of him touring with John Nemeth. Also check out John's double disk Live album. AC and Kid are in that lineup and it is pure Fire!

So ladies and gentlemen, without further adieu, AC Myles....